Update your Knowledge and Confidence 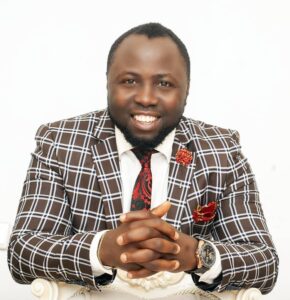 PHIL ROBERTS is a mechanical Engineer, a multi talented musician , a media practitioner and a talent development consultant with highly technical and professional skills, coupled with a well developed acumen reflecting a career of strong leadership.

In 2008 after graduation from school he formed a band called GOLD MUSIC which he used to bring succor to several talented young people in the streets of the NIGER DELTA in Nigeria as he partnered with many NGOs to sponsor young talented Youths to Malaysia for talent development.

In 2009 Phil Roberts led a group of young people to use entertainment as a major tool to stop insurgency in the Niger delta region of Nigeria and also pleaded to the boys to embrace peace and not War.
In his ambition to strengthen young people, he has organized so many major talent empowerment projects with several Churches and NGOs as he is presently pushing the 35% youth affirmative action in Nigeria

He has also organized several free career development seminars, youth empowerment projects and workshops for young people in Port Harcourt, Delta, Abuja and Lokoja where he transformed the lives of young people.

He is the C.E.O of Phil Roberts & Da Sound Signatures, The manager of State legislatures magazine &Tv , a Nigerian Representative to the African Achievers Award and also the country director of Project Know Thyself (PKTS) NIGERIA.
Notably, he has worked with several talent exhibition projects/shows as Judges and music director/instructor here in Nigeria.

He positions his music ministry as an avenue for young people to grow their talents and also fend for themselves. He is presently

Phil Roberts is a degree holder in Mechanical Engineering and also a professional member of the American Society for Non-Destructive testing engineers (ASNT). He holds a certificate in the Leadership Development study centre and also a member of society of mechanical engineers (SOMES).
A certificate from the Mohammed Bin Rashid university of medicine and health services as an ambassador in their community IMMUNITY Ambassador project and the deputy Chairman Data coalition,information gathered and campaigns for the African Union ECOSOCC Nigeria

He is the Gospel Rock ambassador of Abuja, Won several awards and also the President of Abuja Gospel Artiste Forum. As a professional in the entertainment industry he has credited himself with the release of Hit songs like faithful God, Mighty God, Ebube, Savior ,Lifter of my hands, Chioma Heaven Play my song which is being a blessing to the world and also on radio stations around the world.